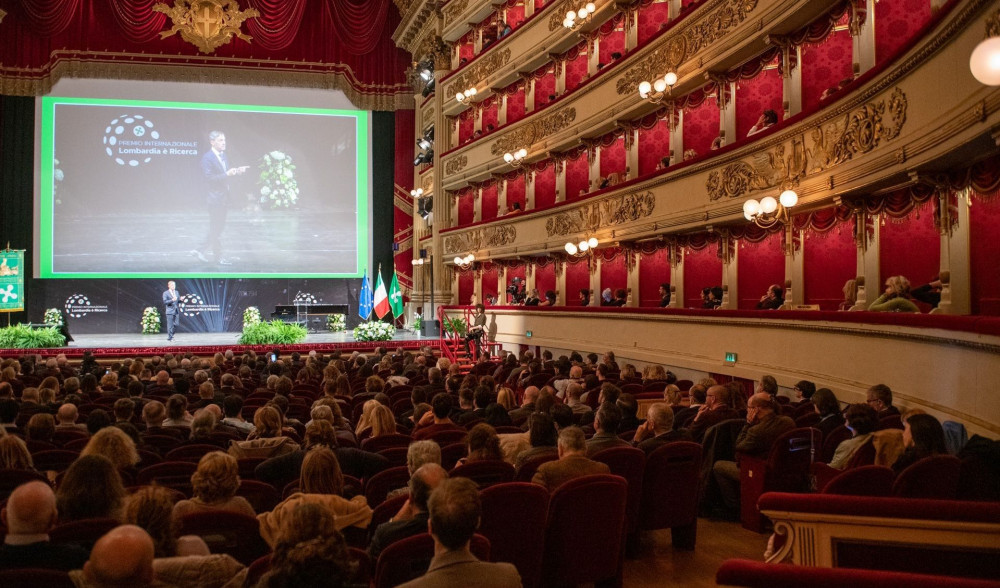 Rosalind Picard will collaborate with the Buzzi and Niguarda hospitals

Scientist Rosalind Picard received the “Lombardia è Ricerca” International Prize at La Scala Theatre in Milan. The Award grants €1 million to be used for study and analysis activities to be carried out mainly in Lombardy.

The awarding of the Lombardy “Nobel Prize” took place at the end of the fifth edition of the Lombardy Region's Research Day, with the prize awarded for the best scientific discovery in the field of Life Sciences, chosen by a jury of 15 top international scientists.

This year’s theme was “Computer Science for Safety, Wellness, and Sustainable Growth”.

Besides being a scientist and an engineer, Rosalind Picard is an inventor and an entrepreneur as well as the Founder and Director of the Affective Computing Research Group at the Massachusetts Institute of Technology (MIT) Media Lab.

Her research is focused on the use of Artificial Intelligence to decipher the physical and emotional state of people, through the interpretation of data collected by sensors placed in wearable devices such as smartwatches and wristbands. It was precisely her scientific contributions in the field of Affective Computing - i.e. the study and development of software capable of detecting human emotions and interacting accordingly - that earned her the prestigious award.

The projects developed by Professor Picard’s research group range from the possibility of detecting the severity of an epileptic seizure to predicting depression. They also study how robots and computers can intelligently react to human emotional feedback, also to facilitate effective interaction with autistic people or those suffering from social and relational disorders.

“This award,” commented Governor Attilio Fontana, “concretely represents the great attention that the Lombardy Region pays to research". An award to a scientist of international calibre that also wants to be an acknowledgement of all those professionals who, at every level and in every sector, are committed to innovating and finding solutions that will improve the quality of our lives. So, congratulations to Rosalind Picard on behalf of the whole of Lombardy, with the commitment that our focus on research will continue to be constant”.

“Our main objective is the well-being of our citizens and to enable Lombardy's research centres and medical practices to establish lasting relationships of collaboration and scientific interaction with the winner” said Lombardy Region Vice-President Fabrizio Sala. “It is a great honour” Sala added, “to know the winner has chosen two of our centres of excellence, the Niguarda and Buzzi hospitals, to pursue her research in collaboration with MIT. This is a great opportunity for our researchers but also for our students”.

"I'm thrilled and humbled with this honour," said winner Rosalind Picard, "I want to credit the amazing research community of the MIT Media Lab, a team of diverse talents and new viewpoints making innovations of excellence".

“I am also deeply appreciative of the team at Lombardy start-up Empatica,” Picard continued “they have turned some of our research into products that are now making a real difference to people’s lives. I am very much looking forward to working with researchers in Lombardy,” she concluded, “to make new scientific and technological advances that can improve people's health”.

Research Day, which, as every year, takes place at La Scala Theatre in Milan, is dedicated to the memory of Umberto Veronesi.

"Research Day," said Professor Paolo Veronesi, president of the Umberto Veronesi Foundation, "is a vital opportunity to reaffirm that scientific research should not be seen as an expense, but as an investment for tomorrow, and that scientific progress should be recognised as a collective endeavour".

Collaboration with Niguarda and Buzzi hospitals

According to the rules of the award, 70% of the prize must be invested in Lombardy, in collaboration with local research centres.

Winner Rosalind Picard chose the Niguarda and Buzzi Hospitals to continue her research.

A clinical study on neurological disorders, with particular reference to epilepsy, will be carried out at Niguarda. The aim will be to better understand some neurophysiological aspects of focal onset convulsive seizures. Today, there is no non-invasive method of investigation to monitor and predict seizures. For this reason, the study aims at finally enabling patients to be warned so that they can take preventive action. Dr Roberto Mai and Dr Laura Tassi will supervise the studies and data collection.

At the Buzzi hospital, the aim will be studying the changes that occur in children’s brains, to understand which changes could represent a health risk during a child’s developmental stage. Using non-invasive wearable devices to monitor children’s everyday and natural activity, researchers will attempt to identify the brain activation patterns most involved in these changes. The paediatric study will be supervised by Dr Pierangelo Veggiotti.

Thanks to funding from the Lombardy Region, it will be possible to support new scholarships for PhDs and young researchers, who will help collect and analyse data.

Amalia Ercoli-Finzi, affectionately known as the comet lady and the first woman to graduate in aerospace engineering at the Milan Polytechnic where she is now an Honorary Professor, gave a speech on the day.

Gerry Scotti, the Lombardy Region's Research Ambassador, was also in attendance, and this year he told the audience about a 24-year-old young man, Simone Pedersoli, who suffers from a rare genetic condition, spinal muscular atrophy (SMA).

Scotti made a personal donation of €30,000 to the Asamsi association, which works on research related to this genetic disease.

"Research Day," said Gerry Scotti, "has always been an opportunity for me to meet amazing organisations and people from whom I can learn and draw real lessons. The story I wanted to tell this year is a perfect example of that”.

During the event, Gerry Scotti was also presented with an award by the Vice-President of the Lombardy Region, Fabrizio Sala, for his commitment as Research Ambassador over the years.

This was followed by speeches by Marco Camisani Calzolari, Professor of Communication and science writer, and actor Alessandro Siani.

The musical tribute to open the event was given by Erica Piccotti on cello and Leonardo Pierdomenico on piano.

The Day was hosted by Alessia Ventura.

Professor Picard created an innovative theoretical research horizon and identified the tools for a new way of interaction between humans and Artificial Intelligence, in other words, she used A.I. for the first time to objectively measure and improve human well-being.

The research interpreted data collected with wearable devices to decipher the physical, but also emotional state of people.

Professor Picard’s achievements in both fundamental research and current and potential applications of her findings convinced the Jury, which chose her work among 33 high-calibre candidates.

Some of the devices she has worked on can detect the most life-threatening type of epileptic seizure and send an alarm when it occurs. Thanks to her ideas and inventions, researchers around the world are initiating projects to advance discoveries in the fields of emotion, epilepsy, stress, sleep, mental health, addiction, Alzheimer’s disease, autism, and pain studies.

Picard was able to brilliantly and effectively combine academic research and applied findings: she translated basic research into innovations and thus into marketable products. A particularly courageous approach, capable of going beyond the research laboratories to test the validity of her inventions.

During the day, awards were presented to the winning students of the “Lombardia è Ricerca” Award for schools.

First place went to the students of the C.F.P.  Padri Somaschi Institute in Como, who invented the Hero Pen: . This sturdy marker pen shaped like a toy features a series of built in sensors that receive data during use, allowing a child's vital functions to be tracked, monitored and checked in a less stressful and more fun way before medical appointments.

Second place went to the students of the Aeronautico Locatelli Institute in Bergamo, who invented a highly original and innovative device called a skiascope. The device allows for extremely simple and infallible eyesight self-diagnosis for the most common and widespread refractive defects: myopia, hypermetropia, astigmatism.

Third place went to the students of ISIS Cipriano Facchinetti in Castellanza. Their project “Game For Blinds - Inclusive Triathlon” aims at giving blind people the chance to play sports independently, help them enjoy physical education classes more and also give sighted people the chance to a different sensory experience (running without using sight).